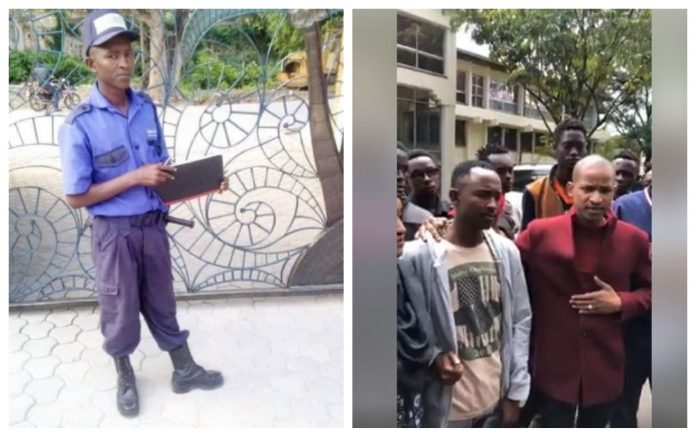 Embakasi East MP has made true his promise to Cosmas Mutua a journalism student who dropped out of Multimedia University due to lack of school fees and became a watchman in Mombasa.

Early on Monday Babu flanked by student leaders from local universities such as Nimo Sheikh took Mutua back to the Multimedia University after paying his school fees for the undergraduate course. The grateful Mutua thanked the Embakasi East legislator and promised to work harder in his studies.

“I want to say thank you to MP Babu Owino. He has brought me from far. To be a watchman was not my portion I had reach a point where I almost accepted my fate,” said Mutua. ” I will be studying journalism,” he added.

Babu urged Mutua to excel in his studies after experiencing the rough side of life.

“I have come to make true the promise I made last year to Cosmas Mutua. We went to KCB and paid the school fees to ensure Cosmas completes his university education,” said Babu.

“So it’s upon you, make sure you work hard has a brother you are also a comrade. You have now seen the bitter side of life so ensure you succeed so that you don’t disappoint this comrades or me,” he added. Babu Owino had promised to help Cosmas Mutua through his social media handles on October 23, 2019.

Top 3 Kenyan Stars Who Have Found it Rough in Politics