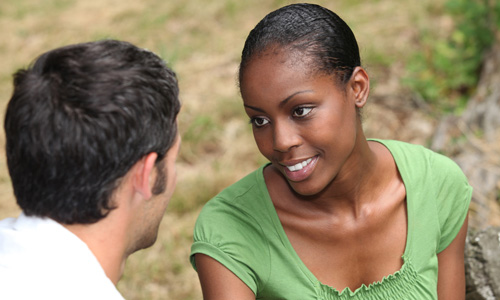 Your nonverbal communication cues include the way you listen, look, move, and react tell the person you’re communicating with whether or not you care, if you’re being truthful, and how well you’re listening.

When your nonverbal signals match up with the words you’re saying, they increase trust, clarity and rapport. When they don’t, they can generate tension, mistrust, and confusion.

If you want to become a better communicator, it’s important to become more sensitive not only to the body language and nonverbal cues of others but also to your own.

The many different types of nonverbal communication or body language include:

Body movement and posture. Consider how your perceptions of people are affected by the way they sit, walk, stand, or hold their head. The way you move and carry yourself communicates a wealth of information to the world.

This type of nonverbal communication includes your posture, bearing, stance, and the subtle movements you make.

Gestures. Gestures are woven into the fabric of our daily lives. You may wave, point, beckon or use your hands when arguing or speaking animatedly, often expressing yourself with gestures without thinking.

However, the meaning of some gestures can be very different across cultures. While the OK sign made with the hand, for example, conveys a positive message in English-speaking countries, it’s considered offensive in countries such as Germany, Russia, and Brazil. So, it’s important to be careful of how you use gestures to avoid misinterpretation.

Eye contact. Since the visual sense is dominant for most people, eye contact is an especially important type of nonverbal communication. The way you look at someone can communicate many things, including interest, affection, hostility or attraction.

Eye contact is also important in maintaining the flow of conversation and for gauging the other person’s interest and response.

Touch. We communicate a great deal through touch. Think about the very different messages given by a weak handshake, a warm bear hug, a patronizing pat on the head, or a controlling grip on the arm for example.

Space. Have you ever felt uncomfortable during a conversation because the other person was standing too close and invading your space? We all have a need for physical space, although that need differs depending on the culture, the situation and the closeness of the relationship.

You can use physical space to communicate many different nonverbal messages, including signals of intimacy and affection, aggression or dominance.

Voice. It’s not just what you say, it’s how you say it. When you speak, other people “read” your voice in addition to listening to your words. Things they pay attention to include your timing and pace, how loud you speak, your tone and sounds that convey understanding, such as “ahh” and “uh-huh.” Think about how your tone of voice can indicate sarcasm, anger, affection or confidence.