-In the CCTV video, a man believed to be Irungu is seen struggling to break the money-safe using a thin wire.

-Irungu was arraigned at Murang’s Law Courts on Friday to face charges of burglary.

-He is a casual labourer who resides in Murang’a town.

Peter Muiya Irunga, a middle-aged man from Murang’s county found himself in trouble after he was caught on CCTV stealing church offerings.

Irungu was arraigned at Murang’s Law Courts on Friday to face charges of burglary.

The suspect was reportedly caught on CCTV on Thursday as he broke into St. James ACK offerings safe making away with some cash.

The arrest of Irungu helped unpuzzle a riddle that disturbed church leaders who had earlier complain about missing offering and decided to hoist secret cameras within the premises. 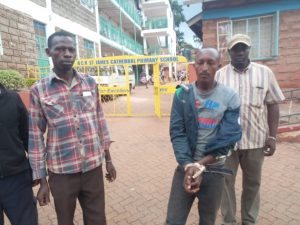 The leaders at St James said they had also witnessed an increase in torn currencies.

Also Read: Man released on Sh100,000 bond after romping a dog to death

In the CCTV video, a man believed to be Irungu is seen struggling to break the money-safe using a thin wire. The tiny wire he uses might have be the reason behind the torn bills.

Locals who know Irungu have termed him as a man with sticky fingers who started engaging in petty crimes as early as 2018.
Also Read: Kwale teacher in trouble for caning 14-year-old girl to death
He is a casual labourer who resides in Murang’a town.

Kenya is my business and development in the country is my heartbeat.  If you have any breaking news story on development, politics, human interest, sports, and governance that has to be told, reach me at kaka@howto.co.ke and we can showcase Kenya together. I believe there’s no place like home and the world will know Kenya when we tell our story.  I focus more on political stories, governance, education, development and human interest stories

Do you have any news or article you would like us to publish? Kindly reach us via outreach@howto.co.ke or howtodoafrica@gmail.com

How to Register and BET on BETWINNER Kenya – Step by...

How to Register and BET on BETWINNER Kenya – Step by...

ABOUT US
Get the latest global news updates in politics, business, entertainment, lifestyle, technology , sports and modern trends
Contact us: howtodoafrica@gmail.com
FOLLOW US
© Designed by Tech For Development
MORE STORIES

Apps
We use cookies to ensure that we give you the best experience on our website. If you continue to use this site we will assume that you are happy with it.Ok